Is This How They Built the Great Pyramid?

There is much debate over how the Egyptians built the Great Pyramid of Giza. And it’s no surprise. Comprised of more than 250 million tonnes of stone, cut to perfection, and built to an exact scale of the top half of earth, the Great Pyramid is a monumental achievement. Not just in size, but in functionality.

The building is so perfectly put together that many scientists believe at one time it acted much like a battery – transforming the subtle current from the rising and falling of the Nile river water table into a much higher frequency. This energy is predicted to have peaked in the King’s Chamber at the centre of the pyramid before being passed up to the cap and stored in the walls of the pyramid.

Many geologists predict this based on a lime render that was once applied to the exterior of the pyramid but has since worn away. The render, which appears to have been mixed from scratch to remove impurities common in limestone and injected with pockets of air would almost certainly have been sufficient to store the generated current.

But I digress. You came to find out how they built the Great pyramid. Well, while researching for Younger Dryas I encountered countless explanations of how the great pyramid could possibly have been built. Wetting the sand in front of giant sleds, internal ramps, external ramps, logs used as rollers, bricks poured with concrete on site. 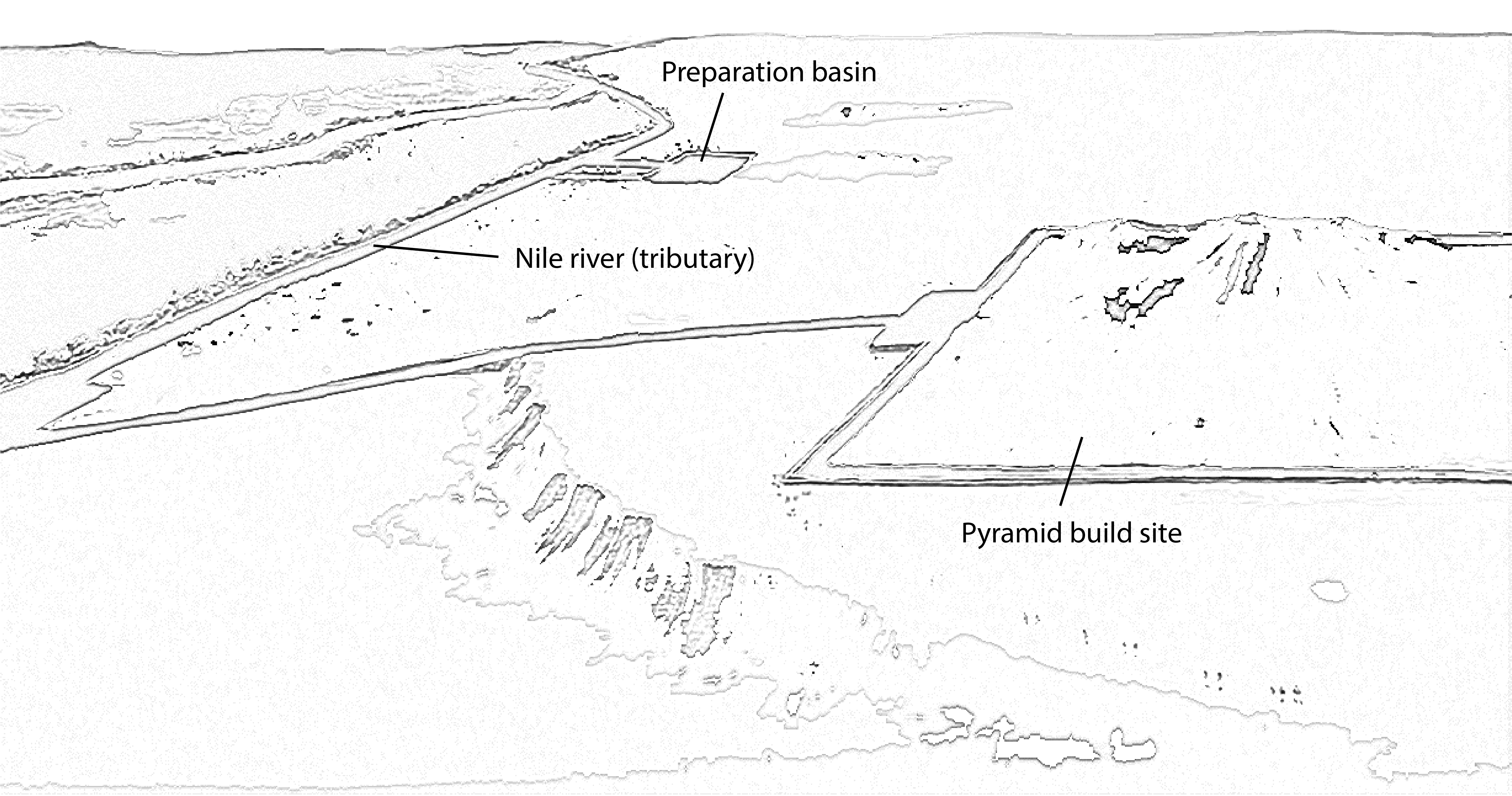 First they would build a preparation basin from upstream of the site of the pyramid. They would then build a quarry as close to the basin as possible.

Chunks of limestone would be cut from the quarry using picks and transported to the preparation basin. Your guess is as good as mine how they moved the rocks but let’s say they used sleds with wet sand.

Once the pieces of limestone arrived at the preparation site, floats would be tied around them. These floats could be animal bladders with air trapped inside. These floats would make it a lot easier to move the rocks around once in the water.

Submerged rocks would be floated to a shelf in a section of the basin. The shelf would be measured to a perfect flat plane. This could be done by damming a section of the Nile and only allowing a select amount of water in as a level. A shelf cut in line with the water level would be perfectly straight. Once the shelf was built more water could be added to accurately measure the two sides of something.

This means rocks could be placed on the shelf and carved away until the surface was flush with the water. Each side would be done the same way until all sides were perfectly straight. The same could be done with the angled blocks at the sides of the pyramid. An angle grooved bench could achieve the same result.

This technique of using a water level is what may have given the pyramid builders the ability to maintain consistency across the entire build.

Once the blocks were cut they could be transported downstream to a dock near the build site. Here water would be used again but this time to do the heavy lifting.

Imagine there are two water-tight gates. The first gate is level with the Nile river and the second gate is positioned further up the slope in a higher position. Both gates will be closed and water will be added to the channel between the two gates. The floating blocks would then be positioned just outside of the lower gate. The lower gate would then be opened and with a bit of coaxing from the stonemasons, the blocks would float upward into the first channel. 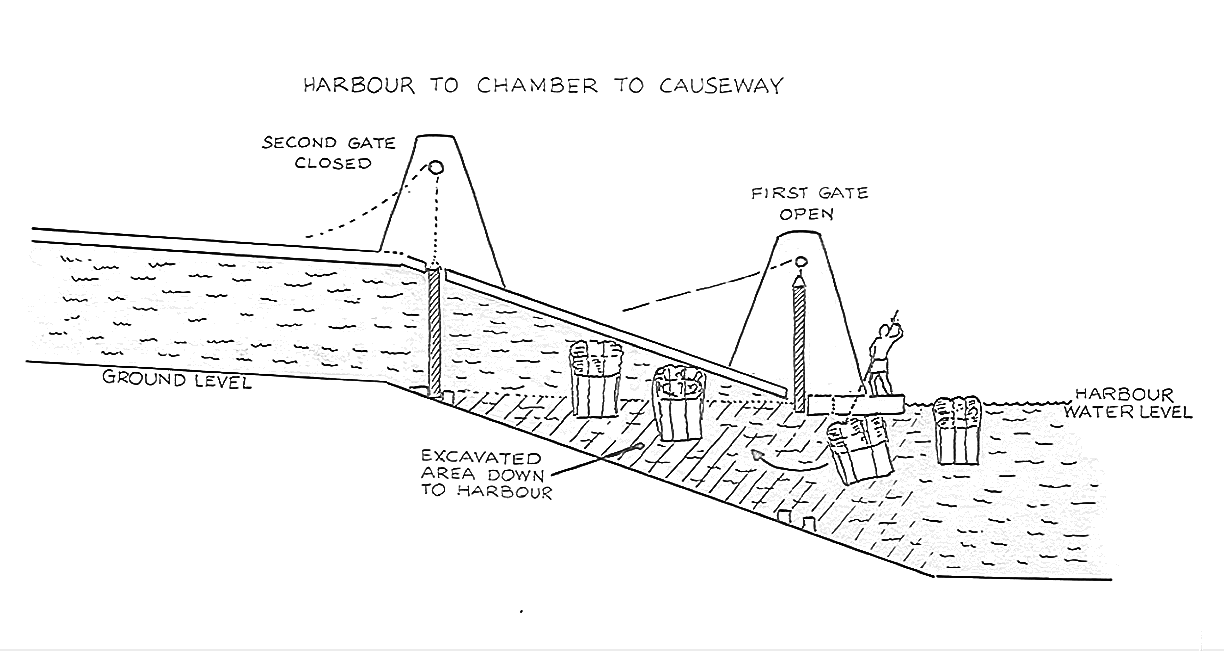 It works much like putting a cup underwater and pulling it up above the water while keeping the opening just under the surface. The water doesn’t move because the pressure is unchanged. If there was a hole in the top of the cup, the pressure would change and the water would drain out. But if the cup is sealed, the water remains.

The same could be setup in the channel between the gates. When the blocks rise into the first section, the first gate is closed and the second gate is open. The blocks can then float higher up to the second channel. This would allow them to transport the stones up to the layer of the pyramid they are currently working on. They could add as many gates as they wish so long as the pressure is always sealed. They could also wait until the flooding of the Nile to transport stones to higher elevations if maintaining pressure became a problem.

Once the blocks reached the level they were needed for they could be floated into place again using channels of water. This could allow the stonemasons to perfect any misalignments. So long as the outer blocks were precisely placed, the interior blocks would be fairly easy to put in place.

This is all far easier said than done, but it certainly isn’t impossible given enough time and manpower. It’s the best theory I’ve found anyway.

A novel by michael mckay

Younger Dryas is a ficitional novel set at the onset of the younger dryas glacial freeze – 12,800 years ago. The book is based on research from Graham Hancock.

A comet stuck in earth’s orbit has just broken apart. In less than a season the earth will collide with a gauntlet of debris. Carnage is guaranteed.

Luckily, the Viracochan star watchers — specialists from an advanced people settled in Gunung Padang, Indonesia — have been expecting the skies to turn for some time.

In anticipation of the disaster, they send 3 arcs to 3 destinations: Egypt, Angkor Wat and Nazca. The mission of each crew is to settle with the natives and to build a pyramid — a school of knowledge — to protect their sacred learnings.

The story is told from the perspective of The Storyteller — a Viracochan specialist — sent to Nazca with the task of winning the native’s hearts and minds, so they will agree to help build a new Viracochan civilisation when the stonemasons arrive.

Accompanied by 50 specialists, 100 combat men, and a head full of stories about a machine that takes people to the stars, he thinks it will be easy… but that’s all about to change when he meets the boy from the cloud forest.

to receive an email the moment the book is available

Subscribe to be the first to know when Younger Dryas is available. No spam.