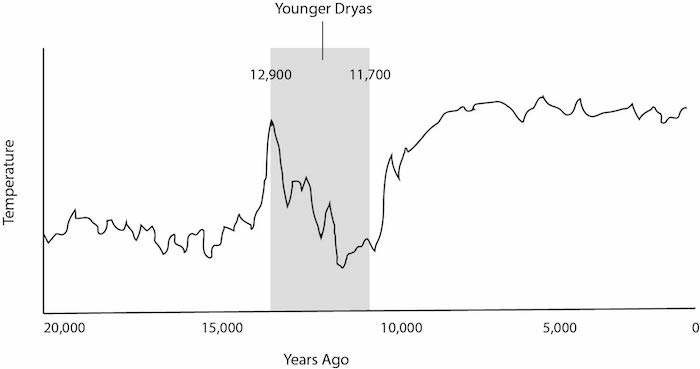 The Younger Dryas refers to a period from approximately 12,800 to 11,600 years ago when Earth returned to glacial conditions.

Evidence shows The Younger Dryas was triggered by impacts from several fragments of comet that hit Earth.

While the devastation from the impacts was global, the carnage centered on North America where at the time a two-mile thick sheet of ice covered half the continent.

When one fragment of comet hit this glacial shelf near Washington state, the ice instantly liquified causing a flood of meltwater 1,000 feet high to tear across the land. Caught in this rush of water were blocks of ice as big as oil tankers, which grinded across the earth like erasers.

When the floodwaters reached the coast, sea levels immediately rose. More than 10 million square miles of land—the size of Europe and China combined—was submerged by water.

Fiery ejectors from the comet impacts also ignited wildfires that raged all over Earth, destroying 10% of Earth’s vegetation and 25% of Earth’s edible biomass.

This ash and debris from the impacts and fires blocked the light from the sun causing temperatures to plummet—Earth was plunged into a 1,200 year thaw.

At the same time there was a 30-60% crash in the human population. Quarries mined for centuries by the Clovis people in North America were suddenly abandoned and the use of the distinctive Clovis spear point disappeared for good.

This is also the time when the Flores people, pygmies living in Indonesia, disappeared from the fossil record.

Today, there is no question whether a comet hit Earth 12,800 years ago. The Comet Research Group, a consortium of 60+ scientists from 16 countries, have put together an undeniable case for the Younger Dryas comet hypothesis.

The question isn’t whether a comet hit Earth, but rather how much was mankind impacted by this event? And how much of our knowledge and achievements were lost forever?

The fact is 10-12,000 years ago is credited as the beginnings of just about everything we associate with human culture and civilization, whether it’s the dispersion of languages, the emergence of agriculture, the first city, the domestication of animals, the genesis of religion. Over and over, the same dates show up.

What if these artifacts aren’t evidence of the beginnings of civilization but rather the rebooting of civilization? Are we seeing the fingerprints from an advanced people whose growth was severely stunted and perhaps even lost in a 1,200 year ice age? People who clearly knew a lot more about engineering, astronomy and global navigation than mainstream historians would dare to admit.

Take Göbekli Tepe in Turkey, perhaps the most obvious fingerprint of an advanced ancient people. The enormous megalithic site has been dated to at least 11,500 years ago. The discovery of Göbekli Tepe in 1994 pushed back the estimated birth of agriculture by more than 5,000 years and the estimated birth of religion by more than 2,000 years. The site is archeology’s greatest crown jewel after The Great Pyramid of Giza, and yet in 25 years less than 5% of the site has been excavated.

Göbekli Tepe is the oldest known perfectly north-south aligned site, it appears almost like an astronomy deck for reading the sky. The site features dozens of enormous classroom-like structures made from stones—some heavier than 50 tons—arranged in circles with a t-shaped obelisk in the center. The obelisks feature detailed etchings of animals, constellations and iconography matched by objects found in Peru and Egypt.

The most puzzling thing about Göbekli Tepe is that it was deliberately buried around 10,000 years ago. It’s as if its inhabitants were trying to preserve its knowledge for us to find.

Twelve-thousand years ago also shows up in Egypt. Twist the stars back 12,000 years and the three Pyramids of Giza line up perfectly with Orion’s Belt, while The Sphinx lines up with the constellation of Leo, and the Nile River with the Milky Way. Coincidence or design? You be the judge but keep in mind Ancient Egyptians believed the soul of the dead entered the sky through Orion’s Belt and travelled along the Milky Way in order to enter the next life.

Atlantis also dates back 12,000 years. Although “Atlantis” has become a career-killing word among archeologists, the myth matches perfectly with the date of the Younger Dryas comet impacts and resulting flooding. There is only one record of Atlantis, it comes from Plato who lived 3,000 years ago. He describes how his uncle Solon visited Egypt and was told by a priest that 9,000 years earlier (aka 12,000 years ago) there was a great civilization that fell in a mighty flood.

Go back even further to Ganung Padang in Indonesia where an enormous pyramid two thirds the height of The Great Pyramid in Egypt dates back at least 20,000 years. And many geologists argue The Sphinx in Egypt is just as old. Erosion from months of prolonged rain suggests The Sphinx was standing long before the Younger Dryas impacts, perhaps thousands of years before.

I became obsessed with this period of history after coming into contact with Graham Hancock’s books: Fingerprints of the Gods, Magicians of the Gods and America Before. Hancock presents robust evidence advanced people existed before the time of The Younger Dryas. His research forges geological and archeological evidence with ancient myths told by more than 2,000 cultures, all of whom recall a great flood thousands of years ago.

I was drawn to Hancock’s research not just because of his overwhelming evidence but also the aggravation I felt towards the science community’s reluctance to embrace new findings. Graham Hancock like many is considered a heretic within the science community because his ideas challenge the work done by others. Even though he was the first to theorize a comet hitting Earth, an idea he had when looking for a reason why so many civilizations collapsed all at once around 12,000 years ago.

Of course, it makes sense. If all your life you’ve written books and papers stating Egypt is 3,500 years old, you are going to be compelled to turn a blind eye when new evidence arrives challenging your dates. This is likely why Egyptologists have refused to investigate an enormous void found above The King’s Chamber in The Great Pyramid—they are afraid of what they might find.

And it’s not just in Egypt where history is being stunted by an incentive to maintain the status quo. Excavation at Göbekli Tepe is moving at a snail’s pace. Less than 5% of the site has been excavated in 25 years, despite it being one of the 20th century’s greatest anthropological discoveries.

And the 20,000 year old pyramid in Ganung Padang, Indonesia? Excavation has been abandoned altogether after rival archeologists convinced The President to redirect funding to other projects.

Thankfully people like Graham Hancock are giving these sites the attention they deserve. This book is my way to do the same. I want to cast the spotlight on a time in history long forgotten. A time when I believe our ancestors surpassed us in many ways from the way they designed buildings in tune with Earth to how they navigated transcendence and the spirit realm.

I think we laugh too easily at the notion of our ancestors surpassing us in intelligence or achievements. I think we’ve been brainwashed by the multi-stage image of a monkey becoming a man. We believe mankind has always trended up and to the right, becoming better and better. I don’t think so. I think mankind had something big and lost it. And I think it was lost during the Younger Dryas.